"I just got off the phone with my wife. We turned down an “offer” to help a friend host a Christmas cookie party. I don’t have anything against cookies (obviously), but we’re trying desperately to remember what Christmas is about for our family. For us, that means buying the kids just 3 presents, it means we go down to the Ice Skating Rink as a family, it means buying a stack of Bill Mangum Honor Cards to send to friends and family and stocking up on Wendy’s gift cards to hand out to the homeless and hungry, it means I spend one night this month as a chaperon at the winter emergency shelter, and (gasp) it means even telling my 4 year old what happened in Bethlehem more frequently than I mention what happens at the North Pole.  I’m not saying we have it right, but I would encourage all of you to think through what is important for you and your family this next month…and then do it."

he note had a post script. I can't resist sharing:

"And for all things Lighted Christmas Ball, go to: www.lightedchristmasballs.blogspot.com"

Lighted Christmas Balls are lighting up all around the Triad. The food collection depots are filling up with non-perishable food. Already, 600 pounds of food has been given to those in need.

"The life-light blazed out of the darkness, and the darkness couldn't put it out." John 1:5 The Message

Whatever you believe, don't leave any life-light turned off this season.

Posted by jonathan smith at 11:42 PM No comments:

UP in Northeast Greensboro - Beautiful ! 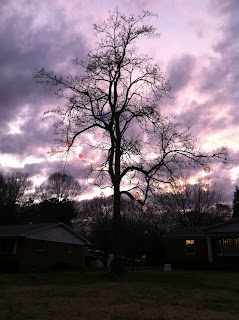 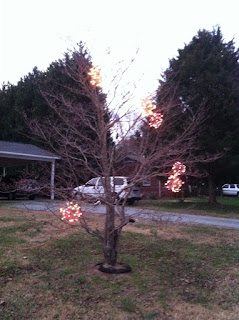 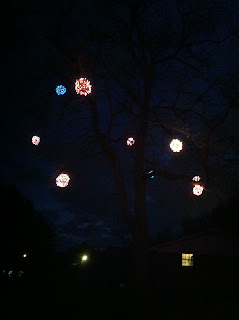 Stephanie and Lewis Apple came by to see us on Sunday just to pick up a few more hints about how to wire all the balls together to get them going.  They examined everything, launched the orbs, and sent photos from Parnell Drive this morning at 6:30 AM.  Now that is dedication.  They are beautiful - thanks for sharing.

Posted by Anne Smith at 4:36 PM No comments: 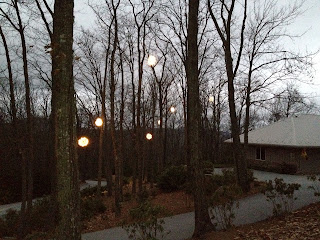 Our friends Jerry and Melissa discovered the challenges of putting up the Lighted Christmas Balls in high winds last year.  The winds actually pulled the electrical cords free from their plugs.  This year, Melissa defined a new way to put them up.  They are up and shining bright.  Beautiful, aren't they?
Posted by Anne Smith at 4:33 PM No comments:

Rolling Road is all lit up 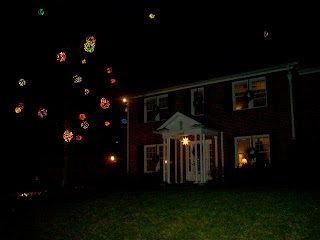 I am happy to report that I cannot imagine another spot for a lighted Christmas ball in the block of Rolling Road in Sunset Hills between E. Greenway N and N. Chapman.  I mean they are EVERYWHERE.  Good job Rolling Road neighbors with a special thanks to Jamey and Phil.  I know you guys do a lot to make that happen.

Posted by Anne Smith at 4:30 PM No comments:

I took Monday off, following our big Lighted Christmas Balls workshop last Sunday.  Fellow light ambassadors Gardner Sheffield, Daniel Hassell, Jamey Presson and Phil Bullington did the same; throughout the day, each could be seen in his yard, hanging up strings from which to suspend the balls.

Daniel walked over to see how I was doing.  He pulled out a large manila envelope, clasped and sealed. It had no markings.  Said a man in an old pickup truck stopped and asked, "who's in charge of all this?" nodding toward the few lighted Christmas balls up in the trees. "We all help each other," Daniel said, "but he folks across the street started it all." He handed over envelope to Daniel, said "please give this to them," and left as quickly as he came.  And so Daniel handed me the envelope. We turned it over, shook it, and patted it down, felt what could have been a kitchen sponge inside. Deeming it safe, "what's the worst that could happen?" we opened it. 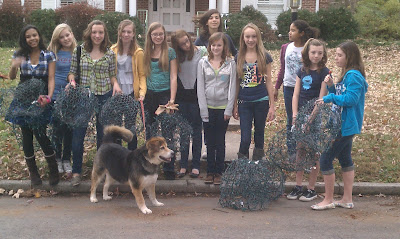 "I heard of a teenage girl who celebrated her birthday by trading in her presents and converting them to canned goods for your food drive. How special. Please accept this gift as an addition to her efforts. So refreshing to see a selfless act, let alone by a teenager. She obviously is being raised by parents with a solid sense of values. Her parents must be very proud - and lucky!

Thank you and the neighborhood for all you are doing this and every year. We all have things to be grateful for."

And an envelope packed with dollar bills. Not your just-fresh-from-the-teller-machine cash. No, these were older, saved up bills, straightened, all face up and sorted into $20s, $10s, $5s and $1s.

One young person's generosity, canned goods instead of birthday presents, multiplied by an anonymous $300 gift, which under the stewardship of Second Harvest Food Bank of North West North Carolina, compounded further; each Second Harvest dollar buys $12 dollars worth of food. That's the miracle of compounding. One selfless act compounded, transformed into $3,600 worth of groceries. I guess that's why compounding is called the Eighth Wonder of the World."

Posted by jonathan smith at 11:48 AM No comments:

Wendy Cousins - emailed us  before the neighborhood workshop for making the Lighted Christmas Balls.  Her daughter Hannah was planning her 13th party.  Instead of gifts - Hannah asked her friends to bring canned goods for the "Shine the Light on Hunger" food drive and lights to make a lighted Christmas ball.  We of course welcomed the group and we were all touched by her generosity and happy to see the fun she and her friends had at the party.

Posted by jonathan smith at 6:50 PM No comments: 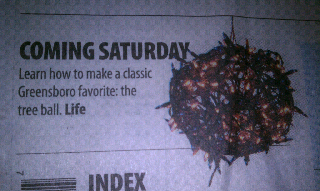 These five Lighted Balls add to the beauty on an already superb Thanksgiving day at High Rock Lake. Posted by jonathan smith at 7:45 PM No comments:

The public is invited to a Lighted Christmas Balls workshop in Salisbury, NC on December 4, 2011 at 10:00 a.m. The event will take place at the Fellowship Hall at John Calvin Presbyterian Church (Overman and Brenner Ave. across from VA Hospital) and participants are asked to bring a can of food for Rowan Helping Ministries.
More info here.

Posted by jonathan smith at 2:58 PM No comments:

Get those Lighted Christmas Balls into the trees! 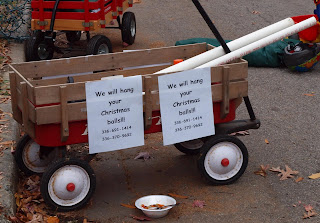 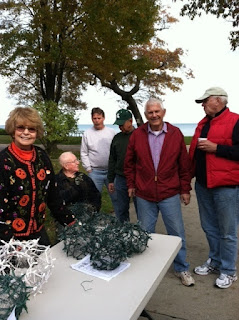 Teri Nelson writes "I just wanted to let you know that my parents were so impressed with what you have accomplished, they are carrying your tradition to Michigan.  They hung their first balls last year and stunned the neighborhood- this year they imitated your fundraising event and had 20 people come to learn how to make the balls!" "Above is their house on Lake Huron (Port Huron, Michigan) last Christmas.  And to the left is a photo from their Christmas Ball party this October (they have to start early because it gets too cold with the north wind coming down Lake Huron)!


Nothing is more fun for us than to see this Sunset Hills tradition taken far away.  Thanks for sharing Teri


Whether you are nearby or far away, if you will send us your photos - we will post them and credit you with the accomplishment.


I'm excited - it sure is getting close to the time to repair ours and get them up.

Posted by Anne Smith at 3:38 PM No comments:

"Where Oh Where can I buy those Light Balls"

Yep - that is the questions we are always asked. Well they are for sale, some Christmas Tree lots, some scout troops, some youth groups, even some enterprising folks have taken the model - bought the materials and put them online for sale.  Just so you know - if you see any for sale - it isn't us!  We have a 'day job' we love so we don't have time to make and sell them :)


The going rate for a ball seems to be around $25 and if you are buying it online that $25 does not include taxes or shipping.  I would encourage you to spend the 7.21 per ball make them yourself and contribute the balance ~17.79 directly to the food bank.


Please remember the food trailer will be out at 2205 Madison Ave Greensboro accepting canned food donations starting Thanksgiving and we will get some lights up after that.


Have a lovely Thanksgiving -

Posted by Anne Smith at 1:22 PM No comments: 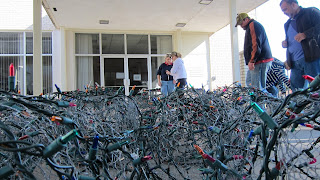 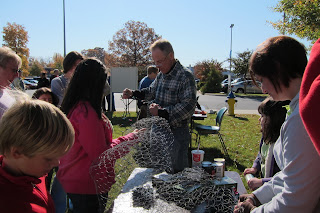 Our friend Rod Mortenson asked us what we thought of installing Lighted Christmas Balls at Morehead Hospital in Eden.  The Eden Rotary Club was excited about the possibilities and invited Jonathan to speak.  Quickly they established a date for the workshop - rallied the people - made 60 Lighted Christmas Balls - and installed them with the help of a bucket truck furnished by xxxyyyy.  The tree will be turned on December 6.  The food drive has already begun.  Here are some photos from the Morehead Float in the Eden Christmas Parade November 25th. 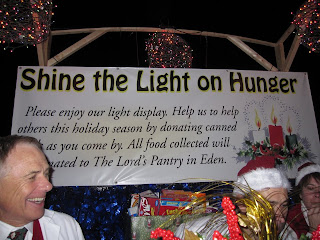 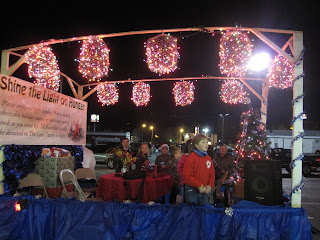 Shine the Light on Hunger

Click to Donate to The NW NC Food Bank

The History of the Lighted Christmas Balls 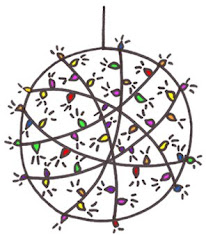